President Dwayne Pearson reconvened the meeting after a delicious meal prepared by the Ladies Auxiliary of the Holloway Terrace Fire Company.

This month presentation was by NCC Chief of Technology and Administrative Service, Mike Hojnicki who spoke about the laptops used by the fire companies will need to be upgraded to Windows 10 by January 14th or they will not work on the County System.

President Pearson advised that the County Loaner Ambulance Contracts for 2020 need to be received by next months meeting.  Dues are due before the March Meeting.

Chief Joe Day of the IRP Committee brought up 2 operational issues to be voted upon this evening.

This policy will cover the procedure for dispatching staffed replacement companies versus utilizing a company’s hierarchy. A map approved by the New Castle County Chief’s Association will be developed to divide the County into four zones.

The four zones will be divided by an east-west boundary and the zones will be numbered 1 through 4. When dispatching replacement apparatus, the map will be utilized to determine which companies will be dispatched.

A motion was made and second to adopt the Apparatus Replacement Policy.  Passed Unanimously

Notification of OAW Dispatch for the closest Animal Control Officer, Dept. of Ag personnel (if needed) and Vet (if needed)

Initiate a question of the caller whether they have a Vet responding or require a Vet to respond; if this is know early in the incident, the rescue/recovery and care can be more efficient and safer for all responders.

A motion was made and second to adopt the Large Animal Rescue Response.  Passed Unanimously

Discussion held on the Carbon Monoxide Alarm Policy of dispatching the next due BLS.

A motion was made and second to rescind the policy of dispatching the next due BLS on all Carbon Monoxide Alarms.  Passed Unanimously

Next meeting will be at Station 27, Volunteer Hose 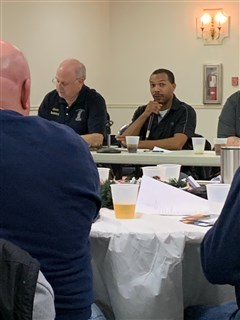