On February 16, 2016 at 07:22 hours, Station 19 was alerted for an MVC with entrapment vehicle in the water.  On arrival the crew of Rescue 19 found a vehcile nearly upside down in the frozen Red Clay Creek.  As the crew exited the Rescue , bystanders advised them that a subject was trapped in the vehicle and screams could be heard coming  from the mostly sumerged vehicle.

Recognizing time was of the essence, Firefighters Lamborn and Burge immediately plunged into the ice covered creek.  Both firefightes were able to observe a female in the overturned vehicle fighting to keep her head above water.  The drivers door was jammed as the  car had struck a tree just prior to flipping into the creek.  Crew members from Rescue 19 obtained a GlassMaster tool which was used to break the drivers door window and Firefighter Burge was able to cut the drivers seatbelt and the frantic driver was pulled from the vehicle by both Firefighters Lamborn and Burge.

The driver of the vehicle was transported to Christiana ER by C-25 and Medic7A.  Both Freifghters Burge and Lamborn were evalauated bur refused treatment.

Congratulations to Firefighters George Lamborn and Matt Burge of the Hockessin Fire Company for being honored with the New Castle County Fire Chiefs Heroic Firefighters of the Year. 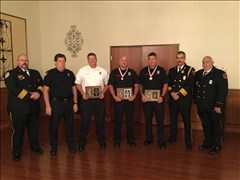